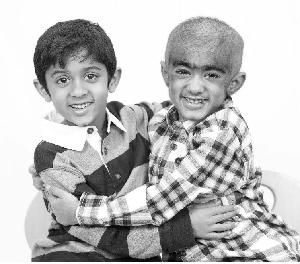 Minneapolis Board of Ambassadors

In September 2017, when Hadi was six years old, his twin brother, Zakaria threw a book at him. His black eye seemed like a standard result until his parents noticed bruising on his back and they felt that something was not right. After a stay at a hospital near his home in Virginia, Hadi was diagnosed with aplastic anemia, a rare blood disease in which bone marrow and the hematopoietic stem cells (red cells, white cells and platelets) are damaged.

Hadi’s family was told that the only cure was a bone marrow transplant from a full sibling. Zakaria was not a match so they first turned to immunotherapy and when that was unsuccessful, Hadi and his family turned to the Be The Match Registry® to search for an unrelated stem cell donor.

Fortunately, Hadi had many matches on the registry. One of those matches had gone through the testing process to donate bone marrow for Hadi rather quickly. Hadi’s first transplant took place in December of 2017 and his second was in May of 2018. Sadly, both transplants were unsuccessful and Hadi lost his battle before he could begin his third transplant.

Although Hadi had multiple matches on the registry, that is not always the case for searching patients, especially those with diverse ethnic backgrounds. While Hadi was in the hospital, he encountered patients who did not even have one match. He was dedicated to ensuring other kids would have perfect matches too. He talked to everyone about joining the registry, even convincing some of his medical staff to do so.

To honor Hadi’s legacy, his family, in partnership with Be The Match, is establishing the Hadi Abdur Rasheed Fund For Diverse Registry Expansion. Together, we are dedicated to eliminating racial disparities on the Be The Match Registry, ensuring that all patients can find their perfect match.

Join the Minneapolis Board of Ambassadors in honoring Hadi and his family. We can make a difference for patients that currently do not have a match on the Be The Match Registry. Your gift will go directly to support the Hadi Abdur Rasheed Fund for Diverse Registry Expansion and can change the future of those in need.

A bone marrow transplant can be a cure for patients with blood cancers and other life-threatening diseases. Seventy percent of patients do not have a fully matched donor in their family. They depend on Be The Match to find an unrelated marrow donor.

Help us reach our goal

Add your name - Give now!